A basic overview of Social Security rules and regulations

The program that formed the basis of today’s Social Security was signed into law by Franklin D. Roosevelt in 1935 as part of the Social Security Act, in the wake of the Great Depression. It had many precursors, such as the Civil War Pension program in 1862, and dating back as far as the English Poor Laws of 1601 – a very early and basic form of state-provided economic security which would have been familiar to the first English-speaking colonists to arrive in the New World.

Social Security law has undergone multiple revisions over the years, switching from a lump sum benefit payment to monthly payments, adding benefits for dependents as well as for a widowed spouse, adding annual Cost of Living Adjustments (COLA), amongst numerous other changes. Social Security law is still evolving today, most recently through the Bipartisan Budget Act of 2015 which introduced some significant changes surprisingly quickly. More changes are likely in the future, given the trust funds into which Federal Insurance Contributions Act (FICA) taxes are paid are on a trajectory to be depleted by approximately 2034, triggering a drop in benefit payments without additional legislation changes between now and then.

Returning to Social Security benefits as they stand today, the main three forms of benefit we’ll discuss are retirement benefit, spousal benefit, and survivor benefit. In this brief overview, we’ll show you how each type of benefit works, and the choices an individual or a couple have to make when selecting the Social Security claiming strategy that best suits their needs. You won’t need to know any of this in order to maximize your clients’ Social Security benefits using LifeYield Social Security+, but Social Security is far more complex than many clients realize. A little extra background information can be helpful in highlighting this complexity and the additional value you are able to provide.

When Can Benefits Be Claimed?

Each of the three types of benefits can be claimed within a range of ages, but the range is different for each type of benefit. The amount of benefit an individual might receive varies depending on the exact month in which they first receive that benefit. In general, the later the claim, the higher the benefit. However, claiming later also means fewer total months of the benefit assuming a certain life expectancy, so already you can see that there’s a trade-off to be made.

A key age used in calculating Social Security benefits is referred to as Full Retirement Age (FRA). FRA is based on an individual’s year of birth. For someone born from 1943 through 1954, their FRA is exactly 66 years. For someone born earlier than 1943, their FRA could be as low as 65. Someone born in 1960 or later has an FRA of 67 years, and FRA increased in 2-month increments for the years between 1954 and 1960.

The diagram below shows the age ranges within which each type of benefit can typically be claimed, and where the amount received by the claimant will vary. In practice, each benefit can be claimed after these age ranges, but won’t have been adjusted upwards any further than the last age in each range.

The most fundamental benefit is an individual’s own retirement benefit, which is the benefit they can claim based on their own earnings history. They can claim this benefit at any time from age 62 through 70, but the amount of benefit they will receive varies based on when they first claim. The Social Security Administration provides an estimate of an individual’s retirement benefit on their Social Security statement. For someone below age 62, their statement will show three estimated amounts; one at age 62, one at FRA, and another at age 70.

But why is FRA important? Well, the benefit an individual receives at FRA (also known as Primary Insurance Amount, or PIA) is used as the basis for all calculations relating to their own benefits as well as any other benefits claimed against their account, such as spousal or survivor benefits. An individual’s retirement benefit, the spousal benefit able to be claimed by their spouse while the individual is alive, and the survivor benefit able to be claimed by their spouse after the individual’s death vary in amount depending on when they are first claimed, with all of the math being based on the individual’s benefit at FRA.

We’ll start by looking at retirement benefits using an example. If an individual with an FRA of 66 looks up their estimated benefits on their Social Security statement (accessible via the Social Security Administration web site at SSA.gov) they might see a benefit at age 62 of $1,500, an FRA benefit of $2,000, and a benefit at age 70 of $2,640. These three estimates are only a subset of the full range of benefit amounts they might expect, given they could file for retirement benefit in any month between 62 and 70 (i.e. there are actually 96 distinct benefit amounts – one for each possible start month). All of these calculations use the FRA benefit and the number of months before or after FRA at which the individual first claims the benefit. To sum up the rules:

Here’s how these adjustments look in practice for an individual with an FRA benefit of $2,000: 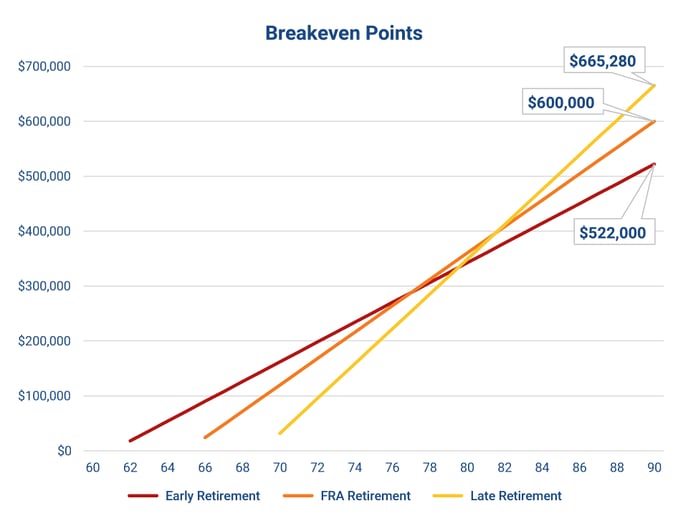 This means that Social Security claiming advice often involves a delay, but not always to age 70 – it depends on an individual’s anticipated life expectancy. When considering a married couple, a divorcee or a widow(er) – especially in cases where more than one benefit type is available or the option to switch between benefit types exists – pinpointing the most appropriate claiming strategy becomes more intricate.

Since the individual has to have filed for retirement benefits before their spouse can claim spousal benefits, there may be a limit on the ages at which they could claim due to having dates of birth that don’t exactly align. Assuming the full range of ages are available to the spouse, the chart below shows the level of spousal benefit they might expect given the same individual as the previous example (with an FRA benefit of $2,000):

The monthly spousal benefit is lower than the individual’s own retirement benefit, and it peaks at the spouse’s FRA of 66. Still, it’s not an insignificant benefit, and so timing it correctly in conjunction with the individual’s benefit is key to getting the most out of Social Security for a married couple, or for a divorcee (who can claim spousal benefits against an ex-spouse’s Social Security account assuming certain conditions are met) trying to determine how to maximize their own benefit.

As for spousal benefits, the available range of claiming ages for survivor benefits may be limited due to the way in which two individuals’ dates of birth relate to each other, and also by the date of the first individual’s death. Assuming an individual with an FRA benefit of $2,000 who had filed for their own retirement benefit at FRA (i.e. with no increase for filing after FRA), then the survivor benefits payable to their spouse would be as shown below based on the age at which the spouse files:

In this example, the monthly survivor benefit peaks at the survivor’s FRA, where it would equal the FRA benefit of the deceased individual. However, it could have been as high as $2,640, had the individual delayed any claim until age 70 so they qualified for the maximum increase, which would then be passed on to their widow(er) as part of their survivor benefit.

Putting It All Together

As this brief overview has highlighted, there are a lot of variables involved in determining the best claiming strategy for your client(s). A married couple may have hundreds or even thousands of possible filing scenarios available to them, with different combinations of ages, different types of benefit, and the possibility of switching from one benefit type to another in order to reach their highest cumulative lifetime benefit.

Even so, this only scratches the surface of the Social Security rules. Other aspects of Social Security – such as the Windfall Elimination Provision and the Government Pension Offset – can reduce or even eliminate certain benefits for an affected individual. Planning for future COLA increases is also important, as is the cost involved in delaying a benefit claim in order to receive a higher payment; some clients may be in a better position than others to bridge any income gap between the end of their employment income and the start of income from Social Security, which leads to yet another trade-off.

LifeYield Social Security+ covers all the most commonly encountered Social Security rules, meaning it can do the heavy lifting for you in finding the best filing strategy, comparing the alternatives, and evaluating the cost involved in filling any income gap while waiting for the benefits payments to start. All of these topics lead to valuable conversations regarding your client’s retirement, with Social Security as the foundation.